This competition has been strongly supported by the Aviation Equipment Manufacturing Industry College of Chengdu Aviation Academy. After the fiery publicity in the early stage, the competition attracted a total of 176 students to participate. The competition is divided into two parts, the preliminary round and the final round. Among them, the preliminary round was held on June 15 through the offline examination. The participating students competed in the three modules of mechanical professional knowledge, tool knowledge, and Golden Egret corporate culture. In the end, 11 winning teams were selected, of which the top 6 winning teams were promoted to 22. In the finals of the day, the remaining 5 teams won the winning prize. 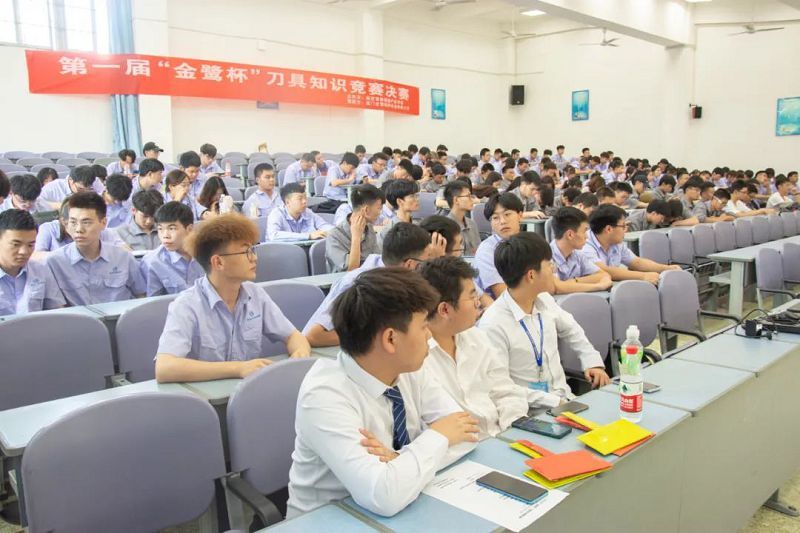 At the final scene, Mr. Zheng Jinhui, Executive Dean of the Aviation Equipment Manufacturing Industry College of Chengdu Aviation Academy, first delivered a speech. Dean Zheng Jinhui first expressed his heartfelt thanks to Xiamen Tungsten Industry and Xiamen Golden Egret Company for their strong support, and said that the content of the "Golden Lu Cup" tool knowledge competition is closely related to the learning content of the Aviation Equipment Manufacturing Industry College. Dean Zheng Jinhui said that he was looking forward to further innovation and exploration in school-enterprise cooperation with Xiamen Golden Egret Company. He hoped that the students of Chengdu Aviation Academy could take this activity to learn more about knives and apply theory and practice. Combined with the continuous improvement of their professional and technical level, they also have a more in-depth understanding of Xiamen Golden Egret Company.

The final of the knowledge contest is divided into five parts, which are team presentation, compulsory questions, quick questions and quick answers, you come and I will guess, and finally exciting and exciting rush questions. 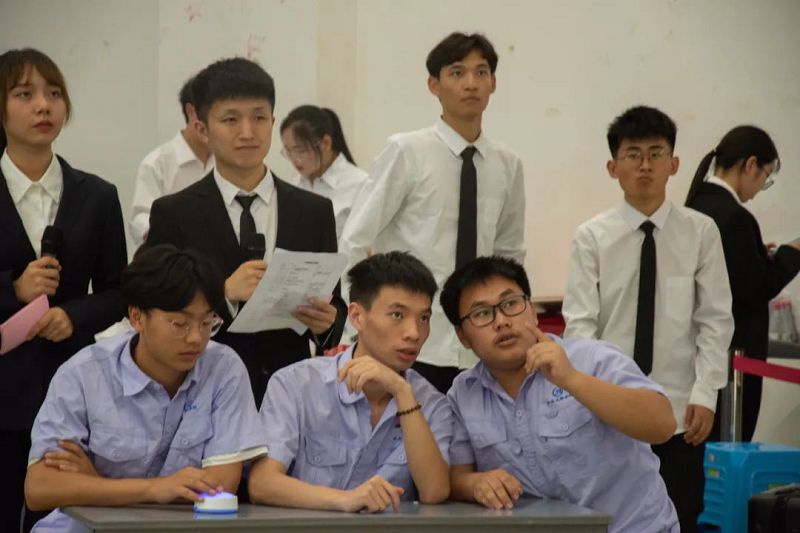 The 6 teams that have passed the preliminary round have made adequate preparations before the competition. Whether they are faced with mechanical expertise, corporate culture knowledge or knife knowledge, the players are well prepared and can deal with them easily. The wonderful performance of the players won the applause of the audience, and the total score of the final was chasing after me. The interactive Q&A between the midfielder and the audience, the mini game "You come and I'll guess" and the lottery session eased the tension and excitement of the game, and also made the audience feel relaxed and happy.

After fierce competition in five links, the six participating teams finally decided the winners and losers. In the end, the "Craftsman's Soul Team" with the highest skills won the first prize of this competition. "Team" won the second prize, "Traveler Team", "Babao Zhou Team" and "Lingbi Team" won the third prize. 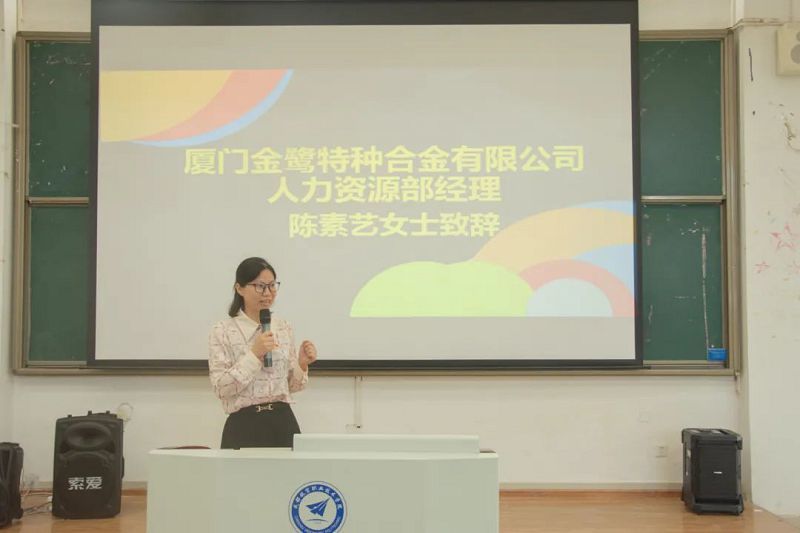 After the competition, Chen Suyi, manager of Xiamen Golden Egret Human Resources Department, was invited to speak on stage. Manager Chen Suyi expressed his heartfelt thanks to Chengdu Aviation Academy for its strong support for this "Golden Lu Cup" knife knowledge competition, and congratulated the contestants for their wonderful performance. . Manager Chen Suyi said that he will take the opportunity of the "Golden Lu Cup" knife knowledge contest to continue to deepen the cooperation and exchanges with Chengdu Aviation Academy, and work together to build a good school-enterprise relationship. It is hoped that more outstanding graduates of Chengdu Aviation Academy will join Xiamen Tungsten Industry and Xiamen Golden Heron in the future! 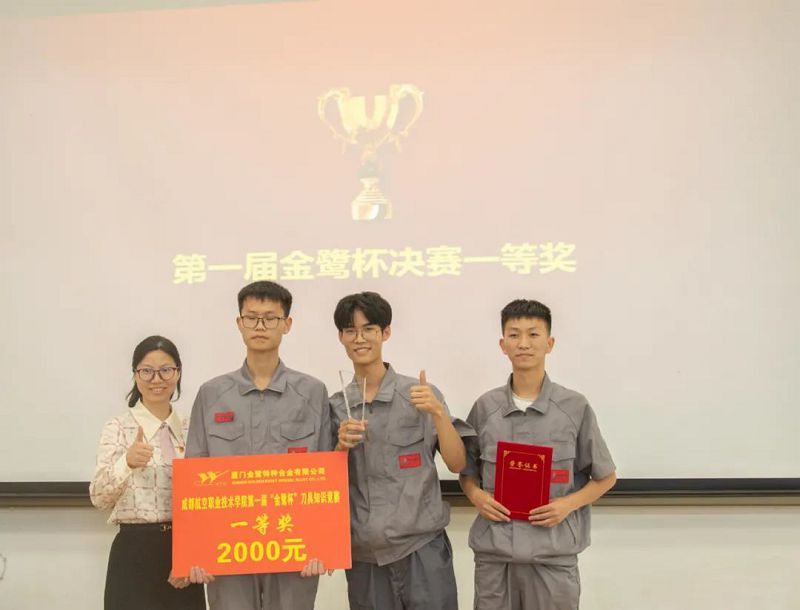 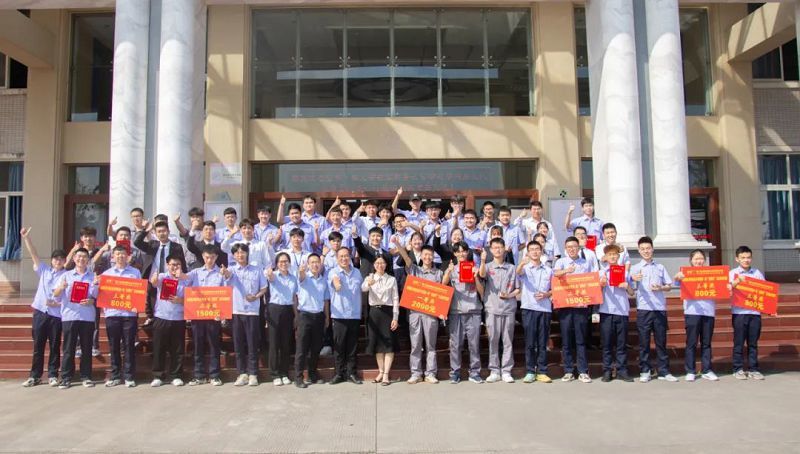 Next： The Centennial Journey of the Party's Flag is Red, and the Golden Heron Soars to a New Chapter-Xiamen Golden Heron Party Committee held the celebration of the 100th anniversary of the founding of the Communist Party of China and the "July 1st"